Dubai is known throughout the world for being a high-tech metropolis with a plethora of luxury and affluent attractions. Billionaires from all over the world come here to showcase their wealth and partake in VIP experiences unavailable anywhere else.

This is host to some of the world’s tallest, largest, and most daring structures. The city is already at the top of its game, with temperature-controlled theme parks and city-sized malls, as well as the world’s largest observation wheel and palm-shaped islands.

We witnessed buildings that reached the sky, islands that were created artificially, and ATMs that threw gold. Fasten your seatbelts as we bring you details on Dubai’s new floating hotel.

Dubai is shattering its own milestones this time. It will be transformed into a floating castle with cutting-edge technology, luxurious facilities, and immaculate aesthetics.

The new Kempinski Floating Palace is a feather in Dubai’s crown, reflecting the city’s unrivaled luxury and engineering. It’s no surprise that the tourism industry will experience a significant increase. Kempinski Hotels is the brains behind this incredible achievement. Kempinski falls under the oldest luxury hotel group in Europe. This hospitality management firm, based in Geneva, manages 78 hotels and homes all around the world.

The Kempinski Floating Palace includes a number of eye-catching elements that will take your breath away. The Kempinski Floating Palace, set to open in 2023, rises majestically from the shimmering Arabian Gulf. It is situated on the beautiful Jumeirah Beach. The hotel features 156 rooms and suites, 12 villas, a spa, several pools, boutique stores, and banquet places, as well as multi-cuisine restaurants, opulent bars, a spa, and luxury bars. The estimated cost of developing such a marvel has been AED 600 million.

The Arabian Gulf’s floating five-star resort is broken down into four sections, with a massive glass pyramid in the center. The satellite villas surround the property and are connected by pontoons. The two-story villas or luxury houseboats have two, three, or four bedrooms, as well as an infinity pool beneath a rooftop patio. The massive, panoramic, floor-to-ceiling windows that will provide spectacular views of Dubai’s turquoise ocean and skyline are another major lure. These villas come with cutting-edge facilities, as well as crew and staff quarters. 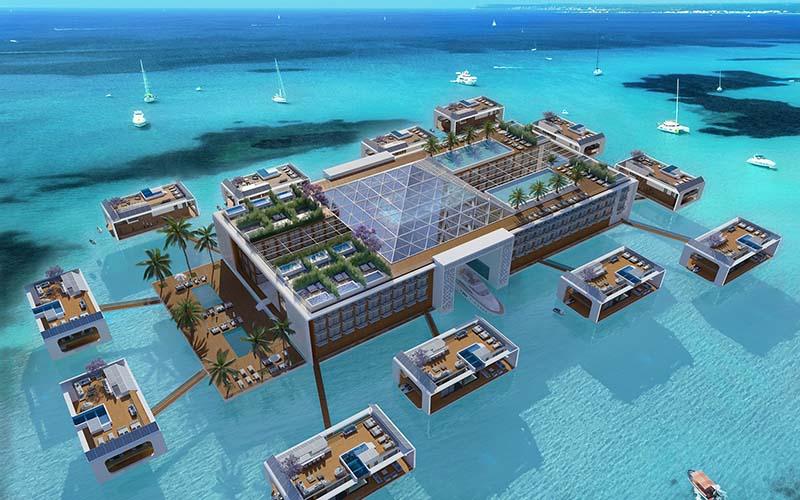 Isn’t all that opulence sufficient?

Guests can arrive in style on a speedboat to this palatial home. Alternatively, a private yacht can be chartered. The blueprint mentions a parking deck with a capacity of 16 vessels.

Are you concerned by road or sea travel? This is one of the reasons why Dubai’s floating palace has an over-the-water helipad. You can fly into the resort like royalty if you book your sky-high travel arrangements.

The swimming pools and enormous spas are expected to be surrounded by luxuriant palms, according to plans. You’re about to get a taste of heaven!

The floating palace is the new face of next-generation tourism and hospitality, peacefully nestled away in environmentally sensitive settings.

The villas, according to sources, are built to be environmentally friendly. These are self-contained developments that provide clients with the highest level of quality and safety. The villas are known as Neptune and are solar-powered. They have self-sterilizing air filtration systems and operate the entire house using automated technology.

The Neptunes has two stories, a terrace, and an outdoor swimming pool on the roof. A living room, a kitchen, and two extra rooms for maids are located on the ‘ground’ floor, while four ensuite bedrooms are located on the first floor. Also every floor spans 300 m².

The craze with the project can be understood by the fact that one of the Neptunes was sold in November 2020 while the opening ceremony was being organized.

Unlike conventional hotels, which are permanently docked on the water, Kempinski’s innovative floating hotel can be moved about. Because of its buoyancy! Don’t get out of your chairs just yet; here’s the big bargain:

Not only do the central luxury resorts float, but so can the 12 villas that spread out from the centre. Isn’t it a fantastic planet to live in? The villas will sail at a maximum pace of 6 nautical miles when they unhook from the pier. We’re still reeling from what we heard!

The furnishings of the floating villas have been created by Aston Martin, a well-known automotive firm along with Laila Aziz.

Mr Mohamed El Bahrawy, the CEO and Founder of Seagate Shipyard, is overjoyed to be working with the best hotel management firm. He even voiced his trust and confidence, noting that this will be Kempinski’s first time managing a floating hotel of this size.

Kempinski’s new cooperation with Seagate Shipyard is the buzz of the town. The hotel is incredibly cosmopolitan and will far exceed your expectations.

Those who want to stay in the villas once the vacations are gone should be aware that they will be partially available for sale. It’s in the middle of nowhere, but it’ll take your breath away with its luxury and restore your senses. Those with a lot of money can rent these mega-residences.

Q1. What does this luxurious hotel feature?

Q2. How is it different from other hotels?

Unlike conventional hotels, which are permanently docked on the water, Kempinski’s innovative floating hotel can be moved about. Because of its buoyancy!

Q3. What are the key attractions near the hotel?

The Kempinski Floating Palace in Dubai will, without a doubt, combine rejuvenation and luxury in a way that has never been seen before. Dubai keeps you on the edge of your seat at all times. Museums, beach clubs, fountains, and other attractions are in the works. This new jewel will surely attract people from across the world and will surely develop into one of the major tourist attractions.